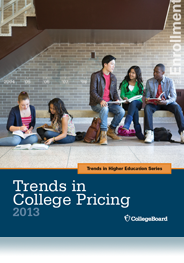 Education Pays
The Education Pays report examines the ways in which individuals and society benefit from higher education, providing information on earnings and employment patterns, financial benefits, and indicators of well-being. In addition, the College Board released, "How College Shapes Lives: Understanding the Issues,” which builds on information presented in Education Pays. Key findings from each include: